EXCITING NEWS! Your Photo into a Pop Art Custom Paint by Numbers - Don't Miss Out!

No products found
Use fewer filters or clear all

Always dreamed of having a van Gogh, a Monet, or another famous painting paint by numbers hanging on your wall?

Here’s your opportunity to paint the most notorious paintings in the history of art, and honestly, no one can tell it’s a paint by number!

Painting by numbers of famous artists

Painting a masterpiece is something incredibly special, but thanks to paint by numbers, anyone can now pick up their paintbrush and create an iconic piece of art on canvas. The use of acrylic allows the painters to be able to show more details, it is also ideal because of the less time it takes for your work to dry. Introduced in the 1950s, acrylic joins the good properties of watercolor and oil. Rest assured, it will not affect the quality of your magnificent artwork.

The 19th and 20th centuries have been marked by the explosion of different art movements within Europe mainly, but not only, all around the world, people were also expressing their emotions with art, from Frida Kahlo in Mexico to Pablo Picasso in Spain, to Katsushika Hokusai in Japan. Hokusai has greatly influenced van Gogh and Monet.

This was an important moment in history and has transformed the way we interact with art today. Although many influential artists were not recognized in their time, we are celebrating them today. This unique opportunity for you to paint these paintings with paint by numbers.

Vincent van Gogh's paint by numbers is a prestigious way to introduce yourself to the world of art for people less familiar with it. Van Gogh is well known for his personal touches and colors. Part of the Dutch post-impressionist movement in the late 19th century, the artist has influenced a whole era. Up until today, his work is exposed in different artistic capitals around the world, from London to Amsterdam, the painter really influenced the world of art. Although misunderstood for a very long time, and going through some hard times, his art is greatly appreciated nowadays.

Van Gogh’s work has led to the development of modern art. The painter’s love for nature would reflect in his paintings. He was a very humble person and would find himself stargazing and dreaming his life away. ‘Starry Night’ is the reflection of that dreamy artist that wanted to share his emotions with his viewers, filled with various feelings.

Claude Monet is the founder of French Impressionism which has flourished in the late 19th century and has shown the beauty of abstract creating little strokes and dabs with a paintbrush. He is at the origin of this technique.

Monet Paint By Numbers are just a beautiful way to revisit this epical art movement and to bring it back to life and into your interior. Monet has impacted a whole generation and just like van Gogh or Picasso, his artwork can be found in the most prestigious museum on the planet. When you hear Monet, beautiful and relaxed landscapes come to your mind. He nailed the art of recreating a beautiful atmosphere, a unique landscape while using this particular technique that is specific to impressionists.

Something that is less known from Monet’s technique is that he would banish some colors from the palette he would use, therefore, no brown or earth colors can’t be found on his paintings. Claude Monet would use a limited number of colors to paint and would be able to create that impression of light using specific techniques and paint.

Claude Monet mainly used oil on canvas and along with other impressionist artists such as Renoir, he would change the way landscapes were painted. Instead of copying in every detail, similar to a photograph, he would rather capture the lights and the colors present in the landscapes. His outdoor painting technique is admirable. Claude Monet had a beloved scene (just like most artists), his preferred spot was the waterlily pond.

Both Vincent van Gogh and Claude Monet were founders of the impressionist art movement that appeared during the late 1850s. This movement is characteristic of a certain technique that is used to paint on the canvas.

Mainly with oil, impressionism means capturing the light of the landscapes, it is not an exact copy of what you are seeing but it is an ‘impression’ of it. The use of little strokes with the paintbrush creates that impression of light and movement and is the pillar to the later movement of pointillism and neoimpressionism.

Different techniques and paintings started to be more popular during the early 20th century, that period being scarred by the multiple wars, people would use art as an escape to express their feelings. Pablo Picasso is a particularly good example, if you are familiar with the Guernica painting, it is a very meaningful painting marking the anti-war movement. Guernica (Spain) was bombarded by the Nazis in 1937, it is a revolt against the catastrophic disaster that was happening in the world.

The 20th century is marked by horrific historic challenges and art was the only way to peacefully go against it. Artists will counter-attack with their paintbrushes and let their colors express their anger and their despair for the situation. However, not everyone was politically engaged.

Artists, such as van Gogh and Monet were from an earlier generation and made a big change in the way we are painting today. During the Middle-Age, painters such as da Vinci or Van Eyck would paint realistic scenes and portraits. With Monet and van Gogh, this will change, and paintings will become more abstract and less truthful to reality. The colors will be more vibrant, and the representation will be more imaginative.

Let customers speak for us

We love Winnie’s Picks so much, we have ordered another custom canvas. After showing several friends and relatives, they were so impressed with the painting, they ordered also! Great hobby for the upcoming winter months! 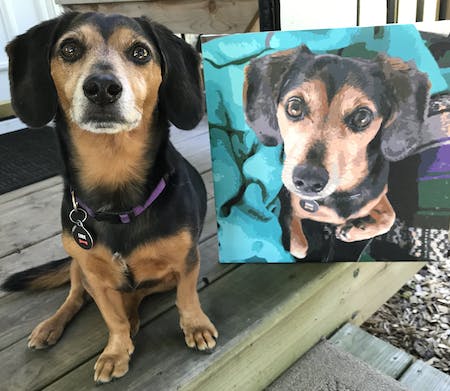 I am a serious amateur photographer, and took this picture of a wood duck at the Albuquerque zoo. I now like the painted version even more than my original photo. I look forward to turning other photos into a painting in the future. 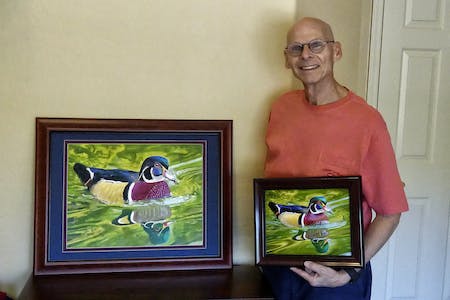 A friend of mine was painting a picture of her dog and it came out amazing, so I chose one of my favorite photos of my little guy and it took me a while but it came out AMAZING. The painting came out amazing and I cannot wait to order another painting through Winnie's Picks again. 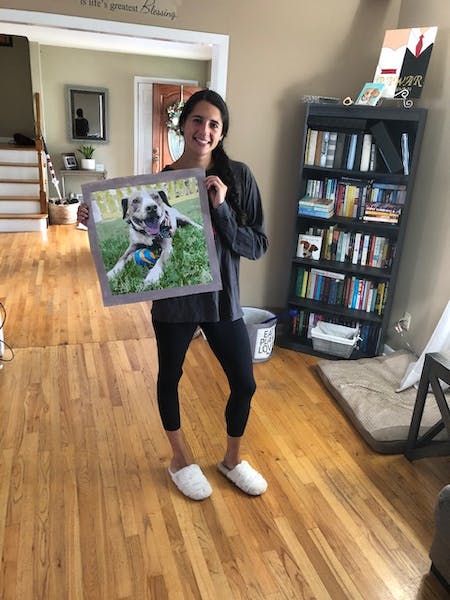 I started out with a photo of Marilyn Monroe. I increased the resolution, ran it through a couple of Photoshop filters: Diffuse Glow to soften it and Palette Knife to round out the edges. Looks good. 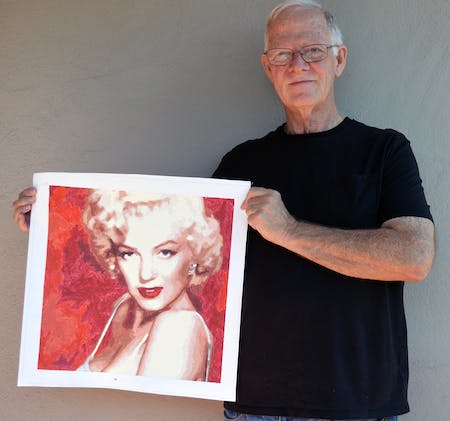 This is my second Custom Paint By Number with Winnie’s Picks. I chose the 36 color option. The painting was very detailed and looks just like a photo. 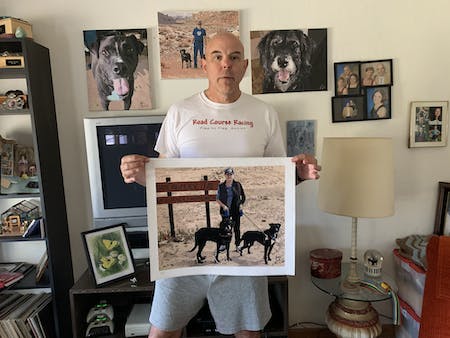 Happiness is enjoying every moment. 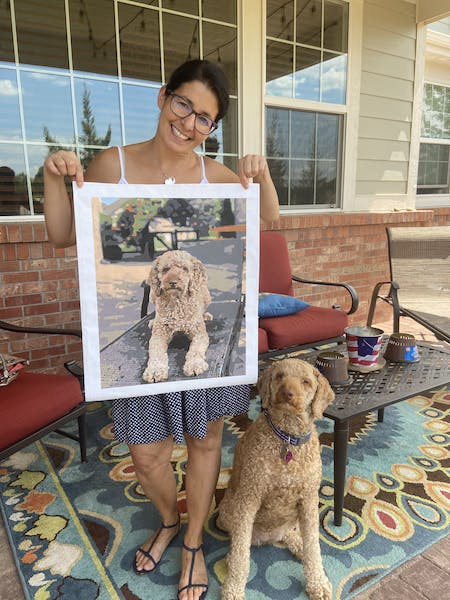 What a great project this has been over the last few months! Product is excellent as well as the excellent customer service and support, Thank you! 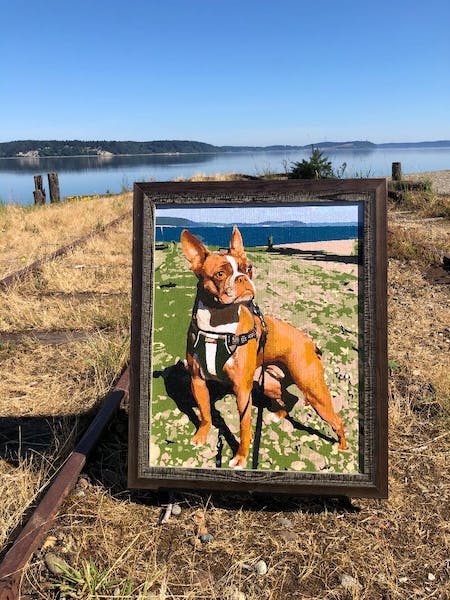 I ordered a custom picture of a favorite picture of myself and my boyfriend and worked on it for his birthday! I kept track of how long it took, and it totaled about 40 hours, I thought that was interesting. I had so much fun painting it and he absolutely LOVED how it looked when I finished! Would love to start another! 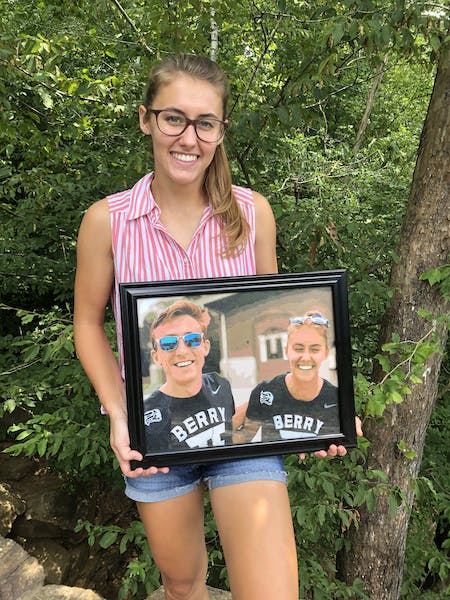 My boyfriend is from England and will not be able to travel home to see his family this year due to the virus. So, I thought I’d bring a little home to him by painting a picture of his favorite player from his hometown team. He absolutely loved it and it’s currently hanging right over his bed next to the team flag. The picture turned out better than I expected and I can’t wait to do another! :) 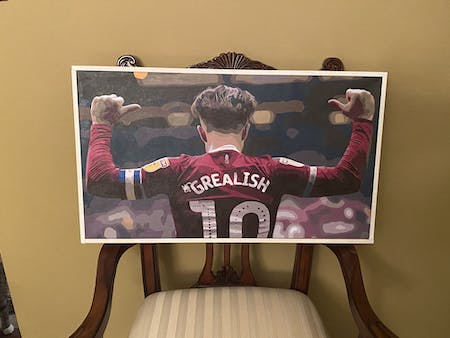 Absolutely thrilled with how the pug portrait painting came out! My husband got this for me for Valentine’s Day so we’ve been working on it a little bit here and there. We are going to take it one step further and have the pugs paw prints go on it too 🐾 Winnie's Picks does such a great job on their custom portraits. This was our first custom order and certainly won’t be our last :) 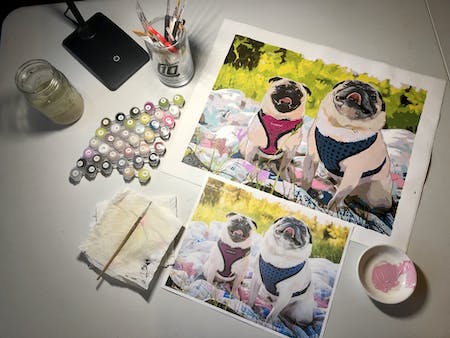 My beloved dad passed away just a short time ago. He was my mom's one true love, her best friend, her heart, her everything. After he passed, she took up oil painting to pass her time and to ease her loneliness. So for Christmas this year, I gifted her with the one painting that she would cherish forever and ever. Our entire family's favorite picture of my dad and his infections smile. He was the light of our family. He put a smile on your face and laughter in your belly every time you saw him. Now, when we see this picture, we can smile too and remember how he made us feel. This painting was done with many hours of love and even a bit of tears mixed in the paint. It turned out even better than I imagined. Thank you, thank you with all my heart.
The grateful family of The World's Greatest Papa 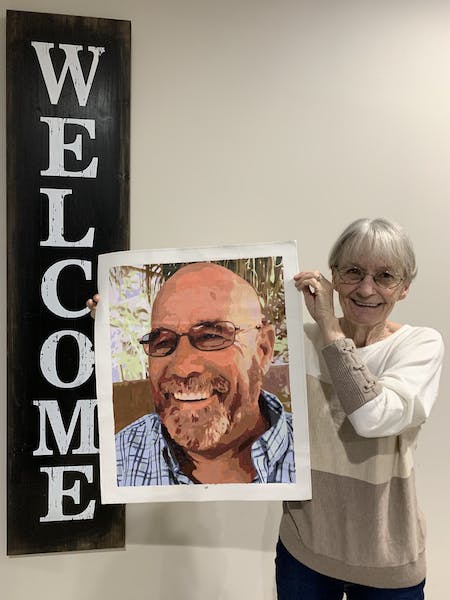 Painted this picture for my little sister, she absolutely LOVED it 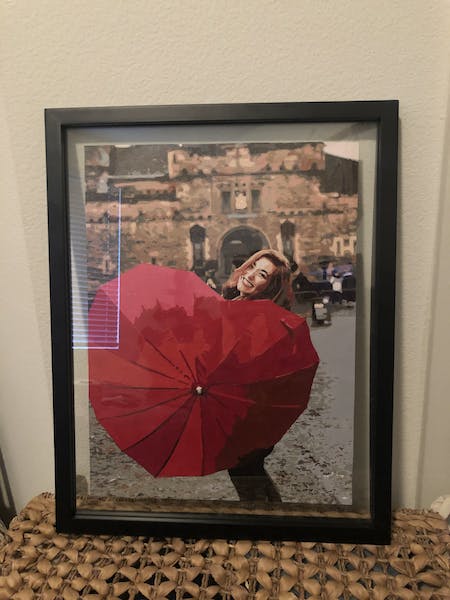 Kristen from The Road to Domestication
11/26/2019
Twinning

I wasn't entirely sure what to expect with this, but not only did I enjoy it myself, but I'm pretty sure others will enjoy it, as well. (So much so that I've added it to my Christmas list for several people!) 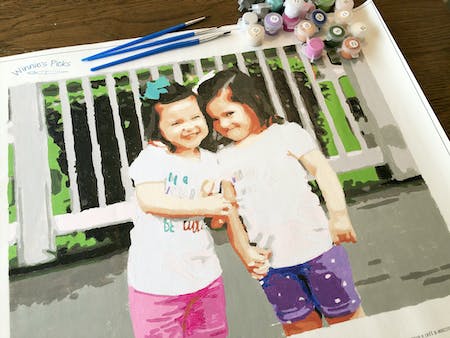